For those of you who read this blog regularly, you know one of my complaints is the lack of really good workout options that provide childcare here in NYC (it still blows my mind that more don’t exist). Unless you want to join select Equinox clubs or another big box gym with a child care center (usually at an additional cost), you’re likely to be looking at hiring a sitter to hit up your favorite yoga, spin or barre class.  However, ExhaleSpa is one spot that has answered my mommy prayers and offers a Mommy & Me Core Fusion class– combining a kick-butt workout and a pretty great childcare solution.

Unlike most mommy & me exercise classes (yawn), Exhale’s Core Fusion Mommy & Me focuses more on giving mom a great workout while letting our little ones  join in, socialize or just entertain themselves (and each other). It’s a typical challenging barre class, except you might see a toddler (Aria!) pulling down all the balls off the bars, or another group of littles stacking yoga blocks in the middle of the room. Oh, and of course there’s always a few pre-walkers hanging out laying on mats or snoozing in a stroller.

Rachel Nicks is an amazing instructor and provides a tough workout, but also goes above and beyond by being extra attentive to mom & baby alike. She’s clearly an incredible multi-tasker, calling out (and doing) sequences but never skipping a beat when walking over to wipe a runny nose or pick up a disgruntled toddler. The workout itself is one of the best I can find. Barre classes have always gotten the best of me, and I’ll admit that there are time I use Aria as an excuse when it starts to really burn (…”what’s that love, you want me to get your sippy cup?”)

For now, Mommy-and- Me Core Fusion is offered only at the ExhaleSpa in the meatpacking district on select Monday mornings. Make sure to check their online schedule and get your little one ready to play while you suffer… I mean kill it!

So Sheryl Sanberg’s latest campaign to ban the word bossy in order to promote leadership among young girls has gotten quite a bit of attention as of late. Twitter been flooded with #banbossy comments, and even mainstream media has lit up, giving Sandberg, and her partnership with The Girl Scouts, ample TV time on national networks. Of course, it doesn’t hurt that big names like Beyonce, Jennifer Garner and Condoleezza Rice have lent their faces to the campaign, but it’s also the controversy that these two little words have brought on that has gotten the press (and everyone) going.

As a media expert, I can say kudos to them for playing the controversy game and putting out a clever hook out to grab attention. It’s brought on attention to an issue that clearly needs to be talked about. As a mom though, I can’t believe that they’ve chosen to make the idea of banning a word the centerpiece of a campaign that deals with a serious issue, to which it is not at all a worthwhile solution.

The idea that banning a word (especially one as pedestrian as “bossy”) as the solution to girls not stepping up into leadership roles, is irresponsible (at best) and dangerous (at worst). Are we really going to start banning words to protect our little girl’s feelings? This is the solution that someone as brilliant as Sandberg has come up with? This is how we will prepare our future leaders to go out into a country where the freedom of speech is a founding principle? This is how we’re going to build them into better leaders and prepare them for the unforgiving place that the world can often be? By banning a word to protect their feelings? C’mon.

Yes, I’ve listened to the interviews and I’ve perused the Ban Bossy website. I’ve read the stats about girls being less likely to volunteer because they want to be liked (and not perceived as bossy), and all the other nonsense about how this one word is limiting our girls. However, the problem with our girls being called bossy and shutting down does not come from the calling of the word. When are we going to stop focusing on the surface problems and start focusing on the root causes? It’s not the external component (i.e. the word “bossy”) that we need to be concerned about at all. It’s the internal that needs to be addressed.

You see, we will never get anywhere if we keep worrying about all the miscellaneous stuff happening that we can’t control (like other people’s actions). We’ll never be able to ban enough words, or restrict enough behaviors to ensure all our kids have a clear path to success. The key to making our girls (and boys) better leaders, better citizens, and, most of all, better human beings, comes from focusing on the stuff on the inside. We need to stop reacting and start to refocus on investing our efforts in that which is truly worthwhile– those things that build confidence, integrity and help them develop a real sense of self– so that none of the rocks in life that are thrown their way (whether being called “bossy” or “fat” or “ugly” or the countless other criticisms and rejections they all inevitably will face) can penetrate them, muchness trip them up.

So instead of offering up limitation and restriction as a solution, why not focus on edification and inclusion? How about we give our kids great opportunities, teach them how to be their best and encourage them to become better through adversity? How about we instill in them the tools needed to deal with the hardships of life–packing them up with self esteem and confidence to the level that allows them to excel and leave behind the inevitable nay sayers? How about we bring on more positive opportunities like mentoring programs, yoga in school, and perhaps even think about teaching them emotional intelligence? How about we start addressing the real issues affecting our kids and stop focusing on silly short sighted solutions?

No, Ban Bossy is not  the answer. We will never see any significant resolution by only looking at things at face value. Let’s go a little deeper for once. Let’s invest in our girls in a meaningful way, one that truly builds character in them and sets them up for real success in life. The Girl Scouts is a wonderful organization, already doing amazing things. I just wish they didn’t get caught up in the ridiculous notion that Ban Bossy should be the centerpiece of their latest push.  It’s a clever media strategy, but not a real solution, and certainly not the message we should be sending to our little girls. 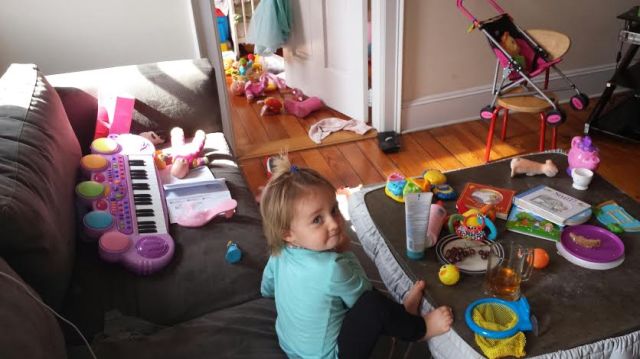 So, it’s FREEZING here in NYC again, and that means no braving it on the playground (although we’ve been known to do it when no other kids would dare!) Having the temps drop, means having to figure out indoor spots to entertain the littles. Here are a few of my neighborhood favorites (& ways to save when visiting).

CMA– The Children’s Museum of Art offers classes and activities for children of all ages. Toddlers can paint, color, play in their bouncy ball gym and enjoy creative art exhibits.  Thursday afternoons are “pay as you wish” and a perfect opportunity to visit and check out the offerings.

Karma Kids Yoga: I LOVE my yoga and Karma Kids has the most offerings for the little ones. With two studios centrally located not far from Union Square, they offer kids yoga and dance classes, mommy & me and pre-natal classes, and fun events and themed classes  like Shark Yoga  and Pajama Glow-In-The-Dark Yoga.  They also have a great FREE story time twice a week and discounted community classes.

Integral Yoga: Another great yoga class for kids. Instructor Lakshmi Pidel takes toddlers (and moms) through simple poses using singing, music and props to enliven the experience. Classes are 45 minutes and just under $20. You can also try it out for FREE (first timers only), and the studio is included in my favorite yogi money saving resource, the Yoga Passbook, so you can access two more classes using that.

NY Public Library: The NYPL offers a variety of toddler and baby classes and story times. The Hudson Park branch used to be our go-to (they had a great big play area with lots of toys), but they  are closed for renovations until spring (hmgh) so we’ve been heading over to Jefferson Market for story time which is a fun hour of stories and crafts. Libraries throughout the city are a great FREE resource and programs are offered throughout the year.

YMCA: I wish I had known all the great stuff the Y offers sooner! They have programs for kids– from swim to dance to pre-school prep classes, all at a very competitive price– in fact cheaper than anywhere else around the city. You can sign up for classes alone (most require commitment for a term), or join as a member and take advantage of the gym, pool and other amenities. My local Y is super nice with state of the art work out equipment, group fitness classes and (most importantly) Child Watch services that allow parents to drop off their little ones to be watched while they work out…for free.

Most people may know me from my media days, but my latest production involves running around town with my little ones. Whether we're at home in NYC or keeping it crunchy in the country house, I am always at trying to keep us all healthy and happy. Join in on the adventures at mommyhoodtake1.com and of course my first "baby" HealthyStyleNY.com.