So, yesterday was Aria’s first celebration of Halloween. She was the cat’s meow in her sweet little leopard print sweat suit, and of course I had to get in on the fun. We hit up the kid’s party in Washington Square Park first (joined by a few more cool cats), and then did the rounds collecting candy through the West Village. 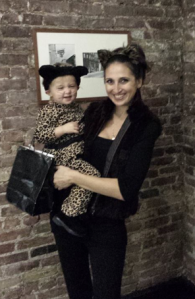 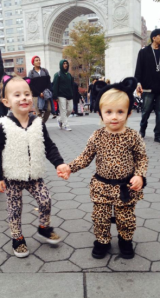 Fortunately, this halloween I was able to get a little tricky and keep her toddler hands off the candy. She still has not idea what it really is, and this morning when she started asking for her “treats,” I was able hand off a banana a women in the building randomly gave her when we were walking up the stairs just back from trick or treating (thank you).  I told her dad I will have to pick up some fun colorful kid’s packs of raisins, etc to hand off to her when she started asking again.

I know as a kid we all turned our noses up at those who gave out raisins and pretzels, but as a parent of a toddler I was wishing for it.  I was super grateful to discover these in the goody bag from the park (Aria couldn’t get enough of the lemon broccoli ones– yes, lemon broccoli).  I was also indebted to out neighbors on the next block over who handed out fresh popcorn with the candy (yes, I broke all the rules and let her eat a non-packaged item from a “stranger.”) Aria was quite happy with her cup of corn and parked herself on their stoop for a good 20 minutes.  After that she scored in Marc Jacob’s makeup store on Bleeker when she walked out with samples instead of candy. They couldn’t resist her cute little face, and (full disclosure) I kinda knew that would be the case when I sent her in despite knowing they weren’t giving out candy. Trick & treat!

Best costume catch of the night: Brooke Shields walking down Bleeker as a City Bike.  Wish I would have snapped a shot.

Most people may know me from my media days, but my latest production involves running around town with my little ones. Whether we're at home in NYC or keeping it crunchy in the country house, I am always at trying to keep us all healthy and happy. Join in on the adventures at mommyhoodtake1.com and of course my first "baby" HealthyStyleNY.com.